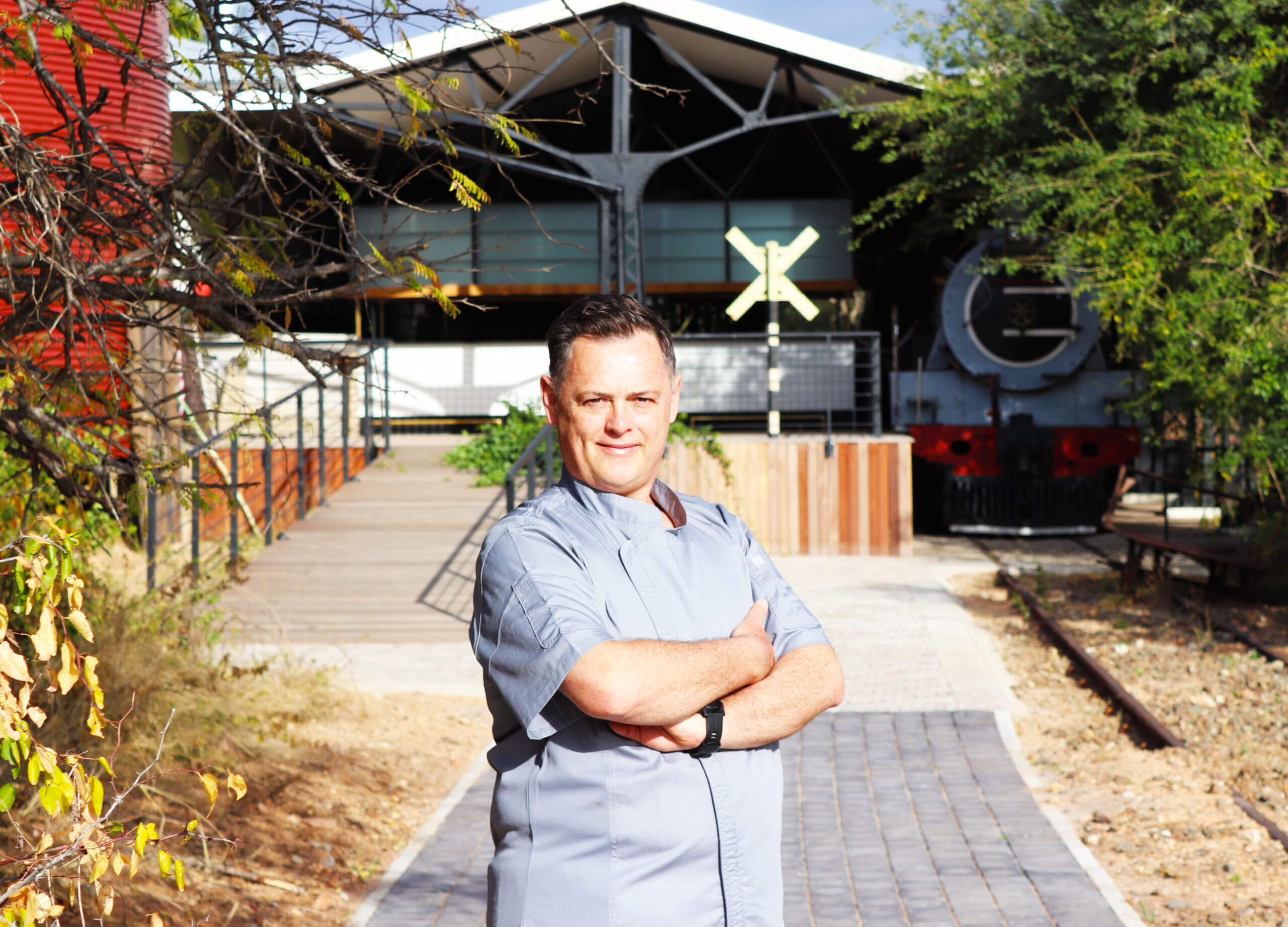 Landing Andrew Atkinson, one of South Africa’s most well-respected culinary professionals, as the newly appointed group executive chef at the Kruger Shalati Precinct – which has been making waves on a global scale – was quite a coup.

Forming part of the precinct, within the Selati concession in Skukuza, the Kruger Shalati Train on the Bridge has been dubbed as an “insane new boutique hotel – the ultimate real estate flipping project” by Robb Report and is often recognised in global media as one of the most anticipated openings for 2020. Kruger Station, which many will remember as the site of the old Selati Train Grill house which operated between 1982 and 2014, has metamorphosed into a lifestyle space that appeals to train fanatics, history buffs, families and foodies.

With food and beverage at the core of both product offerings,  Andrew’s appointment was critical to the operation, and a highlight for the product development. “With Chef Atkinson on board, we know we’re going to be able to offer unique and fantastic food options for all our visitors – something which has been extremely important to us right from the start when we started dreaming about what these products will look and operate like” comments Judiet Barnes, Kruger Shalati Concession General Manager. Designing a light yet eccentric menu, while upholding the calibre of the station, was no mean feat, but Andrew – a master in his craft – has stepped up to the plate.

While he gained popular appeal through his involvement in the hit TV series MasterChef South Africa, Andrew has a string of prestigious accolades under his belt: he was director of the South African Chefs Association and now an honourable Academy of Chefs member (one can only get inducted by making a substantial difference in the industry), a former captain of the South African Olympic Culinary team and a World Academy of Chef Society accredited judge. He also headed a number of Gauteng’s top kitchen operations at prestigious hospitality venues such as the Michelangelo Hotel, Hyatt Rosebank and the Hilton Sandton.

“The essence of the Kruger Station, is that it’s going to be a celebration of the historic Kruger Park, while we pay homage to the modern-day visitor. We are bringing the best dishes from around the world to the safari, creating a delightful food experience so unique that it can only be found here – easy boutique dining, but in a South African way,” Andrew reveals. Some of the unique dishes will include handmade venison bobotie samosas with homemade mango chutney, crocodile parmesan schnitzels with butternut pasta, dinosaur steaks (ribeye on the bone), slow-braised slow-pulled beef roosterbrood and desserts such as the Amarula chocolate fondue. “There are so many features unique to this part of the world so we can be creative with ingredients and adapt popular food items with local game meats and edible plant items,” Atkinson says. Guests will have the convenience of popular lifestyle meals, but done in a different way.

Andrew is setting up all food-related foundations and operations within the concession, and will involve, develop and train his team through exposure. “As the management team for these prestigious projects, we have strong beliefs in the need to develop people through training and exposure to activities outside their actual roles, so the company, the individual and the country benefits. It’s a philosophy I thoroughly endorse,” he explains.

In addition to  job opportunities for local communities, the concession has taken part in its first incubation project:  a partnership developed with local bakers, Sipho Mavundla and Believe Mavundhla. The duo owned Eagle Dough Buddies, a small bakery near Skukuza, that supplied bread to shops as far as Nelspruit, but due to the decline in business and the lack of a partner, they’ve had to close. Under the mentorship of Chef Andrew and the operations team lead by operations GM Gavin Ferreira, these passionate bakers will develop their skills and perfect baking techniques while incubated in the Kruger Station, and guests can see them at work through the open-view kitchen, as they grow their business to ultimately become a prominent supplier to the region.

Even though Andrew has had major highpoints like the privilege of cooking for – to name a few – Nelson Mandela, Bill Clinton, Queen Elizabeth and Prince Charles, he says he is thrilled to be part of the opening team, explaining that, “Whenever you take over a kitchen, you’re able to put in all of the knowledge that you’ve accumulated over the years. But you don’t often get a brand-new opening which allows you to have a say from the beginning. So that really excites me.”

Kruger Station will cater for both overnight and day visitors to the park, offering everything from family dining to grab-and-go. With edutainment a priority in telling the rail history of Kruger, the Station will have a state-of-the-art virtual reality, 360-degree AV venue which will run 15 minute movies depicting the history of the park, starting with the historic elements of the train line, further enhanced with virtual fireside talks with esteemed storytellers. Guests can also expect a play area for kids to stretch their legs between game drives (and providing parents a little break) and various dining options including:

The Kruger Station is set to open first, with an anticipated phased opening in line with the post-COVID19 lockdown period.

Let us host your next special event! We’ve had

The Kruger 360° Cinema is back in business after

We are celebrating WOMEN at Kruger Station this lo

Spread some sweetness around this Women's day at K

Let us host your next special event!

We’ve had countless requests for group-events at the Station – even a wedding or two!

When our clients ask, we aim to please… so whether your group booking is for a birthday, baby shower, kitchen tea, year-end event, friends in desperate need of socialising, or strangers-becoming-friends while on a tour group together, we are ready for you!

Contact us to enquire about our menu options, availability for your preferred dates and what we can do to make your occasion unique. Booking is essential. ... See MoreSee Less

My husband proposed to me on the Selati Bridge August 2020! Such a stunning place!